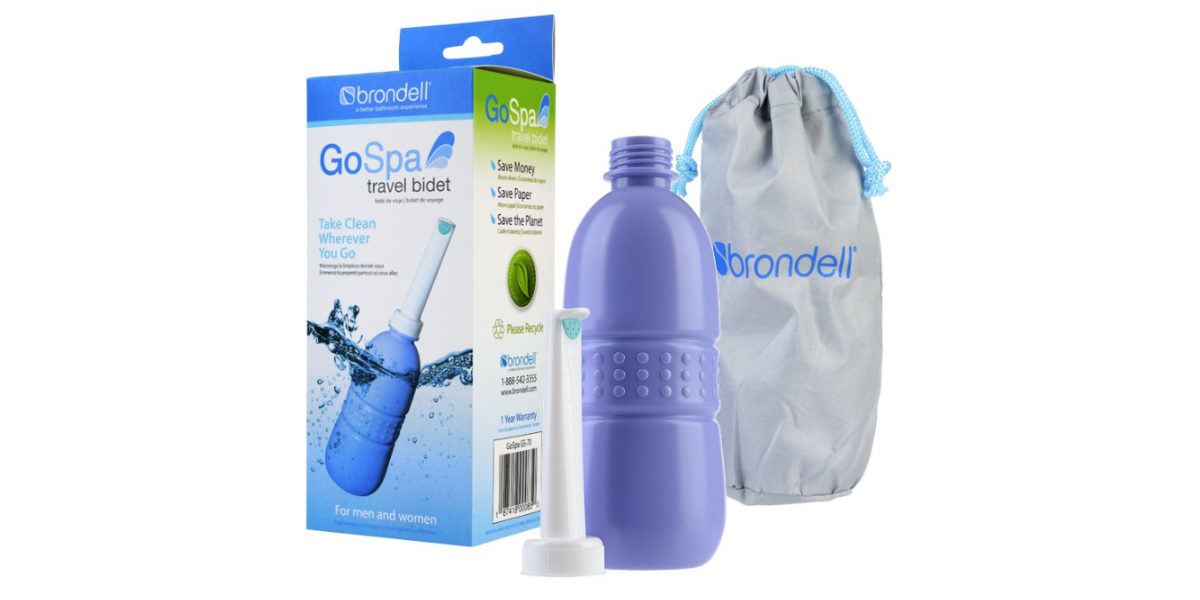 by Gerald Wolery
Bidets are becoming ever more popular in American homes. Long in use in Europe and Japan, more and more buyers are discovering the convenience, comfort, and hygiene benefits that are available with this appliance. But many models are still fairly high in price, and some have features that only a small subset of shoppers might want.

If you’re not convinced how wonderful these devices can be, try one. Low cost, and even more usable than your home model because they’re lightweight and require no water supply or electricity. You’ll quickly be persuaded. You might even want to upgrade to a bidet attachment or seat after a short trial period, like I did. I’m now using the excellent Bio Bidet BB-2000 and Brondell Swash 1400.

What is a Portable Bidet?

A bidet is not a toilet. The two appliances are often combined in modern bathrooms, but historically and functionally they’re completely different devices. A toilet is used to capture waste; a bidet is used to help remove it from you. The bidet – whether full-sized model or portable – sprays water on the anus or genitals to remove unwanted material and wash you.

More expensive bidet types can warm your body, dry you afterward, or perform other functions. But all of them feature that same basic ability: removing feces remaining after elimination or in aiding feminine hygiene.

A portable bidet simply does that in a slightly different way than a full-sized home model. Rather than being built-in to a toilet or toilet seat, the portable style is just what the name suggests: a small portable bottle containing a portion of water. They come in two basic types: non-electric and electric.

There are two non-electric travel bidet types. One type you can buy is the hand-squeezable bidet bottle that has a tube and nozzle attached. Another type that is even simpler is an add-on bidet nozzle you can insert or screw on to an existing plastic bottle you might have lying around.

One advantage of using a nozzle device is that since you supply the bottle you have your choice of volume. For example, you could put twice the amount of water inside a plastic water bottle than the more common sort of bidet bottle you buy.

Non-electric travel bidets all have one drawback that is very much the same. Each one requires a fair amount of force from your hand in order to produce a high-pressure, steady stream. For some people that can be a difficult task. Arthritis, surgery, and other physical limitations can make it tough to balance, squeeze, and operate the bottle. Luckily, there are electric travel bidets that overcome that difficulty.

The electric type is almost always a battery operated model. They tend to be more expensive but they relieve you from the need to exert hand pressure. Usually those batteries are a pair of ordinary AA or AAA but some models actually use the “watch” type disc batteries and even recharge via a USB connector.

How do Portable Bidets Work? 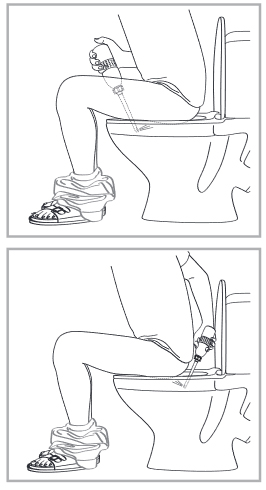 Non-electric portable bidets operate via mechanical action (you squeeze that bottle). Details aside, you fill the bidet bottle with cool or warm water, hold the bidet in one hand, turn the bottle upside down, place a finger over the built-in “air lock” (most of the time located in the bottom to prevent unwanted leakage and turn over), aim the nozzle where you wish, remove the finger from the “air lock” and squeeze the bottle to start cleaning.

The battery-powered models are just as portable as the squeeze-bottle hand bidets, but perfect for those who might have trouble exerting the needed hand pressure. Instead of squeezing the bottle a simple click on a button will suffice.

The answer is a moderately qualified “yes”. Like any product, some work better than others. Some are easier to manipulate, higher quality, or offer special features. Others, less so. I see that obvious truth in the portable bidets I tested.

True, any portable bidet requires a little practice to find the best angle for your usage. A certain level of skill is a must, and some people may justifiably find it isn’t worth the effort. Also, these bottles don’t hold a huge amount of water. For some it will be enough, while others will find it not fully adequate.

Last, some people use these at home, but they’re intended to be operated on the go – around town, on vacation. For home use, there are bidet attachments – some of which are as low as the price of two portable bottles – intended to attach directly under a toilet seat. Or the more advanced fully fledged bidet seats.

So, if a portable turns out not to be a good solution for your bidet needs, don’t despair and don’t give up. Look around and you’re sure to find a model that works for you and your family.

Portable Bidet Reviews – Which is Best?

One thing portable bidets all have in common, besides the basic operating method, is low cost. They’re typically a few dollars (hand-squeezable models and nozzle devices) to a few dozen dollars (battery-powered models). Yet, for that low cost, they very often do an admirable job. So, without further ado, let’s dig into some specific models I personally tested and find out which portable bidet is best for your needs.

See how the Brondell GoSpa GS-70, the Bio Bidet Pearl, the Tushy Travel and the CuloClean compare against each other and find out which is my favorite.

These 5 Bottles Work Great With the CuloClean Nozzle!

CuloClean claims to turn any bottle into a portable bidet. Does it really work as advertised? I decided to test 8 bottles for myself and see if it was true.

Does the UYICOO Nozzle Really Work With Every Bottle?

I decided to test the UYICOO  – another nozzle device – and see if it really works with every bottle, as the manufacturer claims.

CuloClean vs UYICOO – Bidet Nozzles Compared – Which is Best?

I’ve tested all sorts of bottles on the CuloClean and the UYICOO, so I know the pros and cons of these nozzles like the back of my hand. So, which is better?

I read a lot of great reviews about the Mighty Rock Meidong Portable Travel Bidet and decided I should try it for myself. Read on to learn more about my experience with this portable bidet so you can decide if it’s right for you.

Time to Replace Your Old & Inefficient Toilet? Read This Now!
Previous Post
Why I Think a Dual-Flush Toilet Is Better Than a Single-Flush Toilet