by Gerald Wolery
After installing the Bio Bidet BB-2000 in our main bathroom we started to look around for another bidet seat for our second bathroom. A while ago we installed and tested the TOTO C200 but the somewhat weak pressure prompted us to return the unit. As a next attempt, we tried the Brondell Swash 1400. Read on to find out whether this unit became our second-bathroom bidet seat or not.

UYICOO Nozzle Device: Does it Really Work With Every Bottle?
Your Selection... 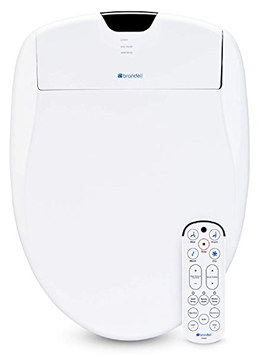 The Brondell Swash 1400 bidet seat requires an outlet nearby the toilet. If you don’t have electricity nearby and don’t plan to add a new outlet or you just want a seat with basic bidet functions look into non-electric seat models.

The Brondell Swash 1400 bidet seat only requires a cold water connection. The seat does not require a direct connection to your hot water system. This unit has a tankless heating system providing a continuous warm water stream for posterior and feminine washes.

Continuous warm water is provided by a tankless heating system. Temperature is adjustable.

Each nozzle is adjustable to one of 7 positions allowing you to adjust the nozzle to your body shape.

The  water pressure strength can be adjusted (3 settings).

Soft-closing seat to prevent loud slamming of seat and lid.

Replaceable active carbon deodorizer to eliminate odors from the air.

Power save mode allowing the bidet to consume less energy.

Bidet is controlled by a wireless remote control. Comes with magnetic dock and mounting bracket.

Cool blue night light for middle of the night toilet visits. Can be turned off.

The Brondell Swash 1400 - A Great Addition to our Second Bathroom!

As you could read in my previous post we initially chose to buy the TOTO WASHLET C200 for our second bathroom. While being a fine product the somewhat weak pressure prompted us to return it. After doing some more research we decided to buy and try the Swash 1400 bidet seat from Brondell It would be tough to say the Swash 1400 was my very favorite bidet seat, but it’s certainly in the top tier.

You can see from the photos below that, while the outer box is a little roughed up, the Swash 1400 arrived well intact. Much of that is the result of excellent internal packaging. Check out those molded cardboard inserts. They protect everything perfectly. The individual packages do a great job of isolating any delicate plastic parts from impact from the metal ones, too.

As usual, everything you need to install the Brondell Swash 1400 is inside the package – including any tools you’ll need, which is none. I did use a wrench to tighten the hose connector to the T-valve (more on that below). Still, if you’ve got stronger fingers than I do you probably don’t even need that.

I followed the usual routine of removing the existing toilet seat, then performing a little cleanup. A quick twist of the in-bathroom water valve and a flush prepared me for doing the rest. After putting down a pan and a towel to catch water I unscrewed the current mesh hose. The towel and pan almost proved unnecessary.

A little plumber’s tape around the T-valve ensured everything would seal well, though this unit is so well made it might not even have been necessary. Ditto the threaded connector on the bidet seat itself to which the other end of the hose connects.

Placing the T-valve in-line was a cinch, and the metal construction is sturdy, leak-proof, and durable. In theory it’s possible to use a plastic one. (Some manufacturers do.) And, granted, plastic never rusts. But this one seems like it will last far longer than the bidet seat itself before that becomes an issue.

Because I misread the instructions I made a dumb mistake at the next step. I put the plate that attaches to the toilet (that holds the bidet seat in place) on backwards. That is, at first I put the rounded end of the plate facing the toilet bowl when it should face the tank.

When I tried to slide on the bidet seat I quickly realized my error. It simply wouldn’t engage the rails on the seat. A brief check of the instructions and a closer look at both parts soon straightened out my thinking. Hey, even an experienced DIY guy can occasionally have a brain freeze! I can’t fault the instructions, since they were clear, as I discovered on re-reading.

The hose proved nearly effortless to attach on both ends. I did have to scratch my head over some illustrations and the installation manual for a few minutes to figure out which end attached to the T-valve and which to the bidet, though. The L-shaped portion goes onto the bidet, the straight end to the T-valve.

Once the hose was in place all that was needed was to slowly turn the water valve near the wall to re-fill the tank. I do so very gradually to ensure that all connections are tight and the plumber’s tape has a chance to expand. No leaks! Doing things right the first time takes a little more time and effort, but it pays off right away.

The only part of the process I found slightly annoying was installing the batteries into the remote. They’re easy to put in place (and the instructions are very clear about which way), but they’re “button” batteries (CR2032), the type used in watches. There are four of them.

If they last forever, great. But replacing them is a little more expensive and difficult than the usual AAA batteries. Those are also rechargeable, if you spend a little more. Still, that’s a very minor complaint.

Next comes my favorite part: using the Swash 1400!

The remote control isn’t an esthetic beauty or at all impressive, unlike the one accompanying the Bio Bidet BB-2000. But it’s lightweight, the text for the buttons is absolutely clear, and the layout is perfect. Everything is easy to reach.

There’s even a magnetic holder you can mount to the wall. I haven’t installed it yet, but I played with it and it would be easy to pull out the remote while hard enough to “tug” to keep the hand-held secure.

A tap on the Rear button starts the cleansing process. It’s programmed to run for 2 minutes but you can press the Stop button to end the wash early, if you want. I usually find two minutes is far more than needed, but it will continue to produce hot water the whole time.

Speaking of hot water, once the flow starts it comes out warm instantly! The built-in heater gives you “on the fly” comfort here. Also, setting the temperature at any of three desired levels is simplicity itself. Tap, tap, tap and you move from “none” to “medium” to “high”. Fear not, though; high is far from scalding.

I do have one negative to report here. The water flow to your body doesn’t begin for about 11 seconds. That’s a bit longer than the Bio Bidet 2000’s 8 seconds, which is already regrettably too long. The Toto C200 starts within a second or two, tops. Still, with practice you can cut down the wait by guessing when you want to start the wash and having it ready when you are done eliminating.

On the upside, and it was a big one for me, the pressure is outstanding. There’s a toggle switch that lets you raise and lower it while the flow is on. Setting it to max will, and I’m only exaggerating a bit here, blow you off the seat. It’s not painful at all, but it’s substantial.

If you like you can easily widen or narrow the spray, too. There’s a button right in the center that you can activate during use and judge just where your preference resides. Personally, I kept it at the default for regular use and only monkeyed with it for testing purposes. However, there might be those times when a wider spray would be desired.

Likewise, the water temperature setting was both easy to accomplish and gave a delightful result. The highest setting is very unlikely to be too hot for anyone, but it’s a great comfort on a cold winter day.

One point of mixed performance here, though. The water temp is a little uneven if you adjust other factors, like the pressure, while the spray is active. I’m not sure why that is, though there is a physical relationship between pressure and temperature. That’s why high air pressure tends to produce warmer days, for example.

The seat temperature is equally simple to adjust and runs through a nice wide range of settings. I live in a relatively warm climate so it isn’t a huge value where I live. Even so, there are those early mornings when a comfortable toilet seat temp is nice to have. If you don’t need that you can save a minuscule amount of money on your electricity bill by turning it completely off.

Similarly, there’s an Eco mode that – in theory – will reduce your utility bill just a tad. It would be hard to say by how much; the effect is very small. But, for those who want it, it’s there. You could experiment by putting it on one month and leaving it off the next to see.

My wife helped me test the Front wash feature and she reports that this feature works as well as the others. Both with this function and the Rear you can easily change the nozzle direction, which gives you a way to finely adjust the angle. No need to wiggle around to get the spray right where it’s perfect for you personally.

The pressure was the best she’d experienced on any of the bidet seats tested. The temperature seemed a little warm for her preference at first, but it settled down quickly. Fortunately, that is easily adjustable.

While I’m on the topic of personal settings, there are User 1 and User 2 buttons on the bottom of the remote. Set every aspect where you wish – water temp, pressure, air dry temp, etc. – and then hold down the User button for a few seconds. It will record your preferences. Then all you have to do next time is start Rear or Front and it will perform according to your choices, for up to two different selections.

Using the Brondell Swash 1400 was an instant pleasure, and that never changed. It’s a superb unit with the potential for a high pressure stream that’s easily adjusted for temperature, angle, and even the spray width. This model is a keeper, for sure!