by Gerald Wolery
We already have a Bio Bidet BB-2000 installed and wanted to buy another bidet seat for our second bathroom. The TOTO C200 (also known as WASHLET C200) is a mid-range model and after doing some research it seemed to fit the bill. For a modest price it offers almost all the features of many much more expensive models. In the end, there were a couple of drawbacks... read on!

CuloClean vs UYICOO – Bidet Nozzles Compared – Which is Best? 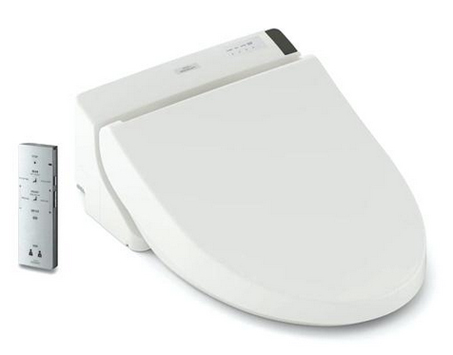 The TOTO C200 bidet seat requires an outlet nearby the toilet. If you don’t have electricity nearby and don’t plan to add a new outlet or you just want a seat with basic bidet functions look into non-electric seat models.

The TOTO C200 bidet seat only requires a cold water connection. The seat does not require a direct connection to your hot water system. Water is pre-heated in the on-board tank.

Warm water is provided by onboard water tank. Temperature is adjustable (5 settings).

The PREMIST feature sprays the bowl before each use to make it more difficult for dirt to adhere.

The  water pressure strength can be adjusted (5 settings).

Soft-closing seat to prevent loud slamming of seat and lid.

Automatic deodorizer function to eliminate odors from the air.

Power save mode allowing the bidet to consume less energy.

Bidet is controlled by a wireless remote control with illuminated touchpad.

Preferred wand position, water pressure and water temperature can be stored for 2 users.

While Being a Very Fine Bidet Seat Here's why I Returned it...

All in all, the TOTO WASHLET C200 bidet seat is a fine product. It has a few issues that affect installation and use, but overall it’s an outstanding value for the money. The company’s products have a well-earned reputation for quality, and this model is no exception – with one aspect I’ll detail below.

I already have the Bio Bidet BB-2000 installed and wanted to buy another bidet seat for our second bathroom. This mid-range model seemed to fit the bill. For a modest price it offers almost all the features of many much more expensive models. But in the end, there were a couple of drawbacks!

The TOTO C200 box contains all the parts you’ll need to install and use your new TOTO bidet seat. Just take care not to scratch the upper part of the bidet mechanism, as the plastic is a little delicate and the attachment screws are metal.

Oddly, the T-valve is not – it’s somewhat soft plastic – which I count as a minor drawback. As we’ll see later, it seals well but it’s hard to know how it would stand up to long-term use. In some ways it might be thought superior to a metal one, since it won’t rust. On the other hand, it’s more easily damaged during installation. That could be a major problem if you found it necessary to de-install and re-install later, at another home for example. Time would tell.

The installation in one way is simple and easy, in another it turned out to be a nightmare. Let me explain.

In principle, like all bidet seats, you start by removing your old toilet seat (simple, by removing a couple of retaining bolts). Then you install the T-valve in line with your existing flex hose, after shutting off the water valve and draining the toilet.

The plastic of the T-valve was already discussed. It will probably be okay for you, as it was for me, if you’re careful and use lots of Teflon plumber’s tape to ensure a good seal.

The difficulty began when attempting to attach the catch plate that lays on the toilet, into which the bidet seat later slides. TOTO chose to supply two metal bolts and a pair of odd rubber parts to attach the plate / bolts to the toilet.

They’re about 3 inches long and have a threaded stock in the bottom about 1/4 inch long. Those bolts/rubber-screw assembly are a disaster! That is, at least they were in my case.

The bolts are just a little too short – or the toilet ceramic a little too thick – to get the rubber-screw part’s threads started onto the bolts. If the bolts had been 1/4 inch longer, or TOTO had made the thread stock inside the rubber a little longer, all would’ve been well.

In the end I had to cut a short section out of the middle of the rubber piece to shorten it, since no hardware store around had size 28 (threads per inch) bolts of any length, much less one’s around 3.5-4 inches long. Goofing around with this cost me a couple of hours of grief.

However, once attached the whole assembly was fairly secure; the toilet seat stayed firmly in place despite my moving around quite a lot to test it. Still, I don’t like having to modify the manufacturer’s parts to complete an installation.

Once over that hump the rest of the install was effortless. You slide the bidet seat onto the catch plate and it clicks right into place. You attach the white hose to the T-valve and slowly open the wall valve, checking for leaks. Thankfully, all was secure with no drips.

Testing/using the TOTO WASHLET C200 was mostly a pleasure.

The seat-closing mechanism works like a charm, but raising the lid and seat requires a little dexterity. You have to move your hand around to the side to find a hand-hold on the lid, then use your fingers to grab the seat.

The remote control is simplicity itself, as well as attractive. There are clear icons and text for all the major functions. On the rear face of the remote there are simple menu options for changing the seat temperature, water temperature, and air dryer temperature.

The actual results during use are very good, if less than I personally was hoping for in some areas.

In particular, the water flow started in less than two seconds. My Bio Bidet 2000 – an outstanding model all around – takes about eight to begin water flow. And from the first drop the water was warm, very comfortably so. Also, it never ran out of warm water during the entire two minutes of use. It’s possible to stop the flow early with just a tap on the remote.

However, the pressure – while very good – was just a little weaker than I would prefer, even after adjusting it all the way to the maximum setting. Still, when coupled with the Oscillation or Pulsate settings, that slightly-weak flow became barely noticeable. Most users would likely never notice even without that. I wouldn’t have, if I didn’t already regularly use Bio Bidet’s BB-2000, which has really super water pressure.

My wife, whom some describe as “tiny”, tested the Front feature and found it an equally mixed bag. She liked the product, but was never completely successful in getting the aim perfect. It required a bit more personal motion than is ideal, in order to get the spray exactly where she prefers. A very minor complaint, certainly, but one that might be shared by other small women.

Overall, I rate the TOTO C200 as a very fine bidet seat – especially given the lower-end-of-the-mid-range price. It’s simple to use while offering most of the features of a high-end unit, including a warm air dryer that works very well.

Even the installation issues, while annoying, were not a deal killer. I was able to work around them without too much effort, and those with a different toilet might not encounter them at all. But I’ve been spoiled a bit by the Bio Bidet seat I installed in the other bathroom (read my review here), so – even for a second-bathroom unit – the somewhat weak pressure prompted me to return this bidet seat.

As a next attempt, I’ll be trying out the Brondell Swash 1400. In price it’s closer to the BB-2000. On paper (and in videos) it looks really good. Read my my review here if you want to know whether this bidet seat lived up to my expectations 🙂